Duplicating The Video Marketing Success Behind 100+ Million Views and $100 Million Sold In Product.

I’m a huge fan of video marketing, and I spend a lot of time studying what works and what does not. Do you know what makes a good video marketing campaign? Why do some video campaigns succeed, while others bomb?

We’re going to discover this right now. This is going to be a two part series. First, we’ll go over what makes a great video and secondly we’ll set up the actual campaign.

You can’t have one without the other.

I know some of you hate the thought of spending hundreds of thousands of dollars on a video marketing campaign. We do too. We have been on a video set with a fortune 500 company that spent $12 million to create 12 simple videos.

Most of you can’t do that, but that should not prevent you from creating a successful video campaign. I am going show you how.

Creating A Video That Works

Who are the Harmon Brothers?

They do this by creating a great video and pushing it out through Facebook, Instagram, New Wires, Google, and YouTube. It’s a system that has proven to be very successful.

They don’t just create viral videos. That’s the aftermath of a great video, a great product, and money well spent on ads. We hate the word viral. Millions of views don’t mean that you’re going to sell product.

My kids have a video with 1.5 million views and they’ve never sold a thing or had one person reach out. Forget the word “viral.”

We’re going to focus on sales and growth.

Meaning, we’re able to scale campaigns to where we can spend more on ads and make more money. This should be the focus of every campaign. It’s what matters. It’s not about branding or views, it’s about sales.

Lets assume the life time value of your client is $200 and your video campaign is producing clients at $100. That is scalable. You can increase your spend which will increase revenue. That is the goal. Create a campaign that you can spend $1 in ads and get $2 back.

What about your product?

Almost all the companies that Harmon Brothers worked with had some momentum and a budget. Very important!

There’s no saving grace for a bad product or service. In fact, a video could accelerate the collapse of a business.

So before you even look into a campaign, make sure you have a great product or service.

It all starts with the script.

Everything starts with the video script.

I transcribed 3 different scripts and you’ll notice they have the same basic pattern of every other successful script…with a couple of exceptions.

Daniel Harmon, one of the founders of Harmon Brothers, said their videos are a mix between a branding video (Nike, Apple) and an infomercial (Shark Vacuum). That’s were the guarantee, social proof, and clear call to action come into play. Those are techniques that come from infomercials.

Here’s a simple breakdown of the Squatty Potty script and the Purple script. 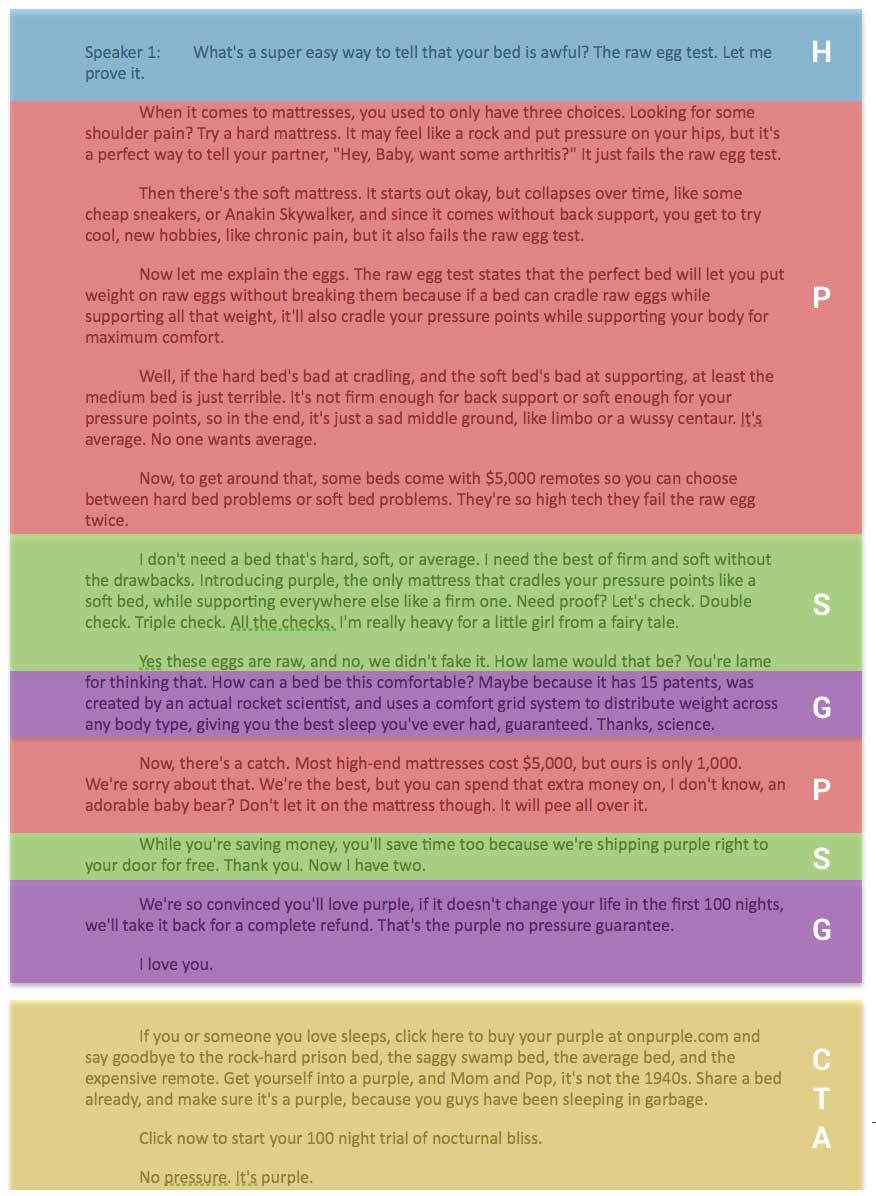 You can see how they stick within a simple formula. Their opening scenes and headlines are exceptional. Go back and read the first line of the Squatty Potty Script. It’s a master piece. A Unicorn pooping on an ice cream cone is an attention grabber.

Let’s watch the Chatbooks video so that you can see the formula live.

Something that really stands out in the Chatbooks video is how much randomness is found in the script. If you do a quick break down here’s what you’ll get.

Problem – Making photo books sucks. It takes too much time, is expensive, and hard to do.

Solution – Chatbooks will do the work for you. It’s easy to use, takes no time, and only cost $8.

Their video could have done this in 30 seconds, but it took well over 3 minutes.

They needed you to buy into the story.

This is where the difficulty lies.

When creating a video script you must know your target audience and get them to buy into the story. If you can make this happen in 30 seconds, great. If not, don’t worry about the length. Do what it takes.

The message should dictate your video length. The length should not dictate your message unless the video has a time restriction. Like a 30 second TV commercial. Everyone says our attention spam is getting worse and nobody will watch a 3 minute video.

That’s simply not the case.

Nobody will watch a 3 minute video that is boring and does not apply to them. Big difference!

Who do you think wrote the Chatbooks script? It was written by a woman who grew up in a crazy house with a lot of brothers and sisters. Here she is.

She nailed the message perfectly for mothers. What mother doesn’t see herself in some of those same situations?

Know your target audience and speak to them.

Once the script is wrapped up, send it out to a couple of people and get some feedback. Don’t expect to nail it on your first time. You will have to adjust headlines and call to actions. This is how you optimize a campaign.

Now you’re ready for production. I am not going to dive into the production process. We will leave that up to the creators, editors, and producers

The one piece of advice, to owners and CEOs, is to step aside and let the creatives do what you hired them to do.

Your opinion does matter, but at the end of the day, the results matter more. Let them go to work.

Here is a copy of the Chatbook’s script if you would like to break it down. A lot of times it is easier to use a template then try and create a whole new script from scratch.

Once your video is done, it’s now time to start pushing it out to your target audience. We will discuss this in part 2.

If you need a script or a video let us know.

Duplicating The Video Marketing Success Behind 100+ Million Views and $100 Million Sold In Product.